One of Australia’s richest men has blasted Sydney — saying the city is “closed for business” and that everyone is headed to another state.

By Jack Evans, The Daily Telegraph

One of Australia’s richest men has blasted Sydney — with developers saying the city is “closed for business” because of a log jam of red tape causing major headaches for housing developers.

Australia’s top property developers and industry insiders claim the finger can firmly be pointed council approvals, and they have forecasted a potential exodus from the city as a result.

Talking to the Australia-Israel Chamber of Commerce’s business lunch on Wednesday, billionaire founder and managing director of the Meriton Group, Harry Triguboff, described the struggle to gain approvals for new builds.

“At present you cannot build in the state of New South Wales … I promise you. If I can’t, nobody can,” he claimed.

He said the delays in building coupled with the allure of warmer climates were now facilitated and even encouraged by Sydney’s emerging planning impasse.

“Sydney has a problem because people prefer warmer climates,” he said. 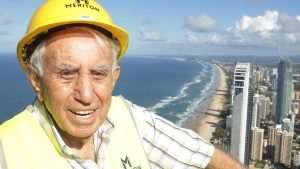 Harry Triguboff on the Gold Coast.

“If (NSW councils) want buildings to continue at the right rate, they have to approve property.

“With the (property) prices increasing or rising the way they are. I think that people will go a lot more quickly.

“The situation is going very well, in Queensland. One of the reasons that is going so well, is because the prices in Brisbane haven’t moved for ten years.”

The 89-year-old developer, who is responsible for overseeing the construction of over 70,000 dwellings Australia wide, believed local governments were largely bowing to pressure from existing residents who don’t want to see apartments in their neighbourhoods.

“Apartments are the only way out,” he said of the country’s current struggle with dwindling housing supply.
He was far from alone in his views at the lunch with Adrian Pozzo, Chief Executive Officer of Cbus Property agreeing there was a lack of supply because of planning issues.

“You can put these (developments) in front of councils and it normally takes two to three years (to be approved),” he said.

“We’ve got a massive undersupply of stock in the next three to five years.” 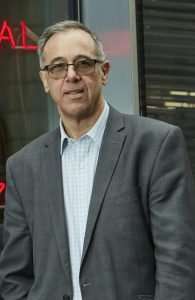 Recent falls in property prices and the current housing affordability issue dominated discussion among industry insiders from a range of sectors over the course of the lunch.

Mr Owen said he had noticed the beginning of a population shift to the regions, specifically Queensland.
“The frustration is felt in New South Wales on many levels. It’s closed for business. It’s so much easier to develop on the Gold Coast, the Sunshine Coast,” he explained.

“In regional Queensland and Victoria, the rural pathway is so much easier. 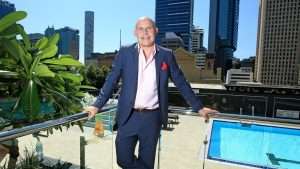 “Sydney’s just got to get to a point where it’s unaffordable for teachers and blue collar workers, nurses, essential trades that are needed to drive the economy and that’s a great concern.”

Relative affordability in Queensland and the regions was beginning to drive a long term population shift, Mr Owen argued. 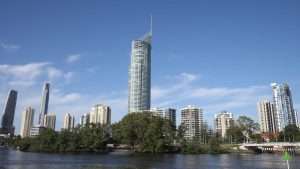 Developers, renters, and buyers appear to be flocking to the Gold Coast. Picture Glenn Hampson

“You can see that playing out now. Queensland offers such fantastic relative affordability, as in many of the regions,” he said.

“(Is this) a short term adjustment to Covid? Or is this a long term structura adjustment? I’d be looking at the latter.”

She agreed it would be a challenge to hasten planning processing in NSW.

“It’s a lot harder to force construction in areas that don’t want the new homes around them.”

Tom Mackellar, Managing Director of Development at Lendlease said if affordability issues in Sydney weren’t fixed, the consequences could be dire.

“Key workers in our economy are just not going to be able to thrive in our cities,” he said.

He proposed 15 per cent affordable housing targets for development.

While the doom and gloom of falling prices and affordability issue were among issues which dominated the lunch, Mr Triguboff appeared optimistic, saying: “We always come out well”. 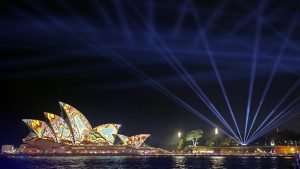 Sydney could have a serious problem on its hands. Picture: NCA NewsWire / Nicholas Eagar

He said if foreign workers could be housed, eventually, so too will the rest of Australia.

“I don’t know where we’ll house (foreign workers) and more importantly, whether they will come if there is nowhere to live,” he said.

“It’s not a matter of housing being dear or cheap, there’s just nothing there.

“We will have to watch how many will really come, how many want to come and how they will be housed.”
“However, after a year or two, the same people will build many more houses than we have.”